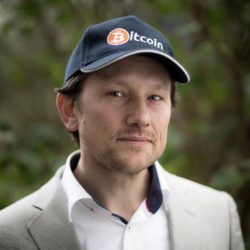 At Bitcoin Wednesday on 2 December 2015, we’ll hear a talk from one of The Netherlands’ first Bitcoin entrepreneurs, Robert-Reinder Nederhoed, about what it’s like to be running a Bitcoin business in The Netherlands and why the world might become a better place through Bitcoin.

In 2012 he initiated a mining operation known as Bitmin which ran for a period of 17 months.  In the same year he also founded Bitmymoney.com, a startup providing Bitcoin services for non-technical users.  Bitmymoney offers a way to buy bitcoins with euro in The Netherlands and Belgium via the Ideal payment system and to sell bitcoins for euro to bank accounts in all SEPA countries all over Europe.

In 2012 Bitmymoney provided the cafe De Waag in Delft with a Bitcoin payment solution, making it one of the first businesses in The Netherlands to accept bitcoins.  In 2013 the company acquired € 400,000 of funding from a handful of angel investors, including the founders of cyber-security firm Fox-IT, which works closely with the Dutch government and was one of the first digital investigation agencies in Western Europe.

Since then, Robert has focused all of his efforts on the development of a secure, user-friendly Bitcoin account.  His firm was selected to compete in this year’s Dutch Fintech Awards.  He has a degree in Artificial Intelligence from the University of Groningen and a passion for web development.  Before founding Bitmymoney he worked as a web developer for the KNMP, the royal association of Dutch Pharmacies.