Bitcoin Wednesday’s 6-Year Anniversary on 3 July 2019 presents cryptographer Ren Zhang, who will compare Proof of Work (PoW) to Proof of Stake (PoS).  Proof of Work is a mathematical algorithm that produces results that are difficult to calculate but easy to verify, the guiding principle that secures Bitcoin.  Although the PoW concept was first proposed in the early 90s, Satoshi Nakamoto’s novel use of it, described in the Bitcoin white paper, sparked the cryptocurrency revolution.

How Does Proof of Work Work?

The central mechanism that controls the Bitcoin network is a consensus algorithm called Proof of Work. An algorithm is a process, a fixed set of steps that have to be followed. For example, in order to make scrambled eggs, you first need to break eggs into a bowl, then stir, and add a certain amount of heat among other steps. Bitcoin’s consensus algorithm is the mathematical process by which participants on the network can come to an agreement on how transactions are processed and arranged into a series of blocks. This way when you send or receive Bitcoin on the network there is an agreement about it: the transaction must get a certain number of confirmations on the network — usually at least 6 — before the payment is technically considered to be completed.

The central idea behind Proof of Work is that this mathematical process takes a lot computational effort — and energy — to calculate but easy to verify. The verification process is why Bitcoin is considered “trustless”. With Bitcoin, miners have performed proof-of-work calculations to validate the transactions in a block, which the other participants on the network can verify relatively easily. At the next Bitcoin Wednesday, cryptographer Ren Zhang from KU Leuven will give a presentation that compares Proof of Work to Proof of Stake, its main competitor in the industry.

In his talk for Bitcoin Wednesday Ren will explain what Proof of Work brings us that was previously impossible and how it compares to alternatives like Proof of Stake.  He writes:

More than $146 billion in crypto-assets (75% of them worldwide) are secured by Proof of Work.  As of June 2019, $1 million worth of Bitcoin is created every day to compensate miners who use physical resources to secure the system.  These numers are not small, and it is likely that they will grow even larger if cryptocurrencies continue to thrive.

In order to avoid PoW’s high level of energy consumption, many new cryptocurrencies turn to other consensus mechanisms.  How do they match up to Proof of Work?  Have they achieved their goals?  What do they sacrifice, if anything?

Ren is one of the top cryptographers in the field of blockchain consensus.  A researcher at COSIC Research Group at KU Leuven in Belgium, he focuses on consensus protocols and privacy- and security-related problems in peer-to-peer networks.  He is currently working on a variant of Nakamoto Consensus with higher throughput known as NC-Max.  He is also a cryptographer for Nervos, a new Proof-of-Work blockchain, and a research assistant to Bart Preneel, the designer of RIPEMD 160, the hash function used to compute from your Bitcoin public key to your Bitcoin address.  Ren’s research group at KU Leuven happens to be the birthplace of AES, the advanced encryption standard used in almost all electronic devices.

In 2017, after Ren discovered design flaws in the Bitcoin Unlimited scaling proposal, he was invited to work with Pieter Wuillie and Gregory Maxwell at Blockstream.  His paper, “Lay Down the Common Metrics: Evaluating Proof-of-Work Consensus Protocol’s Security” which he co-authored with Bart Preneel, was presented at the 2019 IEEE SP symposium in Oakland. 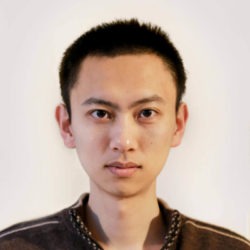