Rutger van Waveren is program director at Amsterdam’s Rockstart which is currently producing a Smart Energy Accelerator for new companies in the energy sector.  He will talk about the best conditions for starting a successful startup, particularly the ideal combination of team, market and product at Bitcoin Wednesday on October 5 2016.

Rutger holds a Masters degree in business studies and learned software development in the early 2000s. After a short period in Boston at the W3C, technology became his central interest. He founded two startups, one of which was sold to Sanoma in 2007 (a visual RSS reader). At Sanoma he grew two sites to millions of users per month (a video site and a Q&A site). After that Rutger worked at two other startups: Silk (recently acquired by Palantir) and Questionmark. At Rockstart, Rutger is responsible for selecting (and investing in) the most promising startups and helping them to grow exponentially.  Blockchain startup Dajie is currently participating in Rockstart’s Smart Energy program. 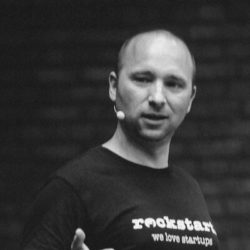