CEO Sam Klebanov of Cinezen will present his project at Bitcoin Wednesday’s 5-Year Anniversary Edition on 4-5 July, 2018.  Cinezen is a blockchain-based solution for the business of online film distribution.  The existing distribution model in the industry was established decades ago and despite many attempts over the years still hasn’t adapted to the Internet age.  It suffers from:

Cinezen aims to be a truly decentralized Video-on-Demand marketplace, where every film is treated as a smart asset and revenue sharing is controlled by smart contracts, thereby guaranteeing transparency and verifiability to all rights holders.  Blockhain technology is used to democratize and de-monopolize user experience, allowing viewers to not only consume content but to become active participants in the distribution process.  An alpha-version of the platform was presented in May at Cannes Film Festival, and will be shown during Bitcoin Wednesday.

Sam is from Gothenburg, Sweden, where he founded the arthouse film distribution company Maywin Media AB in the late 1990s. The company released over 600 films in Russia, CIS and the Baltic countries over its 20 years of operation.  He has also produced and co-produced a number of films, including the Swedish-Russian action flick Newsmakers, Otar Iossliani’s Garden’s in Autumn, and an award-winning documentary called Galle Road: Volunteers Diaries.  He previously worked as a software engineer.  In 2017 software engineer Pavel Rabetski launched Cinezen Blockchain Entertainment AB, which develops one of the world’s first decentralized Blockchain-based video-on-demand marketplaces. 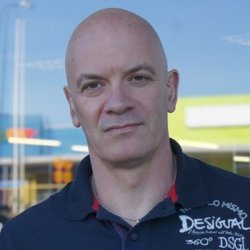