“What are the most important functions of the state? In many parts of the world, we’re used to governments providing everything from education to health care, social security and pensions, the list seems to grow by the day. But if you strip it down to its very core, a government’s ‘raison d’etre’ is really security and jurisdiction, which are increasingly becoming the same thing in the digital age. The Bitcoin blockchain gave us the immutable ledger technology, and the Ethereum and Rootstock projects have given us Smart Contract technology, which holds the potential to make governments irrelevant in its very core function: dispute resolution.”

Susanne Tarkowski Tempelhof is the founder of Bitnation, which is one of the world’s first functioning virtual nations.  During Bitcoin Wednesday’s workshop on Governance and the Blockchain held on 2 December, 2016 she will give a brief update on Bitnation’s recent progress and unveil her plan to build the world’s first Blockchain Jurisdiction, which she calls Pangea.

Susanne began developing Bitnation in 2014 and started to offer some of the services on the blockchain that traditional governments provide such as dispute resolution, security and diplomacy.  Bitnation now has several thousand citizens and ambassadors in more than 50 different countries.  Bitnation provides blockchain-based IDs, public notarial services, education and p2p insurance.

In 2008 she created Wise Strategic Communications in Afghanistan, where she conducted research on local perceptions of governance.  In 2011 she supported local grassroots movements in Egypt and Libya throughout the civil war.  These experiences influenced her belief that the traditional nation-state model is unsustainable and inspired her to explore more ethical alternatives.

She is also the author of the forthcoming book: The Googlement: The DIY Guide to Starting Your Own Nation (And Changing the World) and is a writer and public speaker at conferences at the University of Cambridge, London School of Economics and Global Leaders Forum, among others. She has appeared on television in eight different countries and in The New York Times, BBC, Wired, Bloomberg, TechCrunch, NASDAQ.com and The Wall Street Journal. 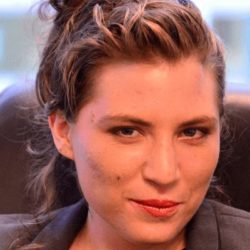