Trust is king.  Thomas Bertani is a founder of Oraclize.it, a service that cryptographically verifies the accuracy of data to be used by smart contracts on the Internet.

During Bitcoin Wednesday on 6 July, 2016 Thomas will give a presentation about the challenges of providing such information to applications on the blockchain.  To illustrate why these problems are important he will also demonstrate some useful smart contracts that he has made, ranging from decentralized insurances to reputation systems.

A smart contract as it was originally defined by Nick Szabo in 1993 is computer code that enforces the logic of a contractual clause.  However, the output of a smart contract is always dependent on the quality of the data it receives as input.  For decentralized applications on the blockchain, sometimes a third party must be invoked to send data to the smart contract that it cannot fetch by itself.  This third party is known as an oracle.

Oraclize.it calls itself a provably honest oracle service because it uses cryptographic proof to verify the accuracy of data that has been gathered off the blockchain.  It then supplies this information to both Bitcoin- and Ethereum-based smart contracts.

Thomas Bertani has been a blockchain expert for many years.  He began his career in the field of high performance computing, but in 2013 he founded Bitboat, a cash-to-bitcoin marketplace in Europe.  Before starting his work on Oraclize, he was a founder of Cointerra, a firm that designed high performance bitcoin miners and managed 5% of the global Bitcoin hash rate.  His focus is now on providing reliable data infrastructure for smart contracts via Oraclize. 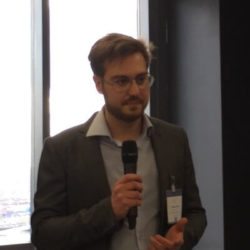