THE PROOF: How the Blockchain System Works

At Bitcoin Wednesday on 1 June 2016, software developer Tobias Schwarz will present his proof of how the Blockchain system works.  Tobias is a Blockchain developer from Germany and a member of the Waves Development Team, which is currently holding a crowd sale that ends at 12:00 pm on 1 June.

2009 was a very special year, not only because of the worldwide bailout of banks but also because it gave light to the innovative technology called Bitcoin created by the anonymous inventor Satoshi Nakamoto.  Satoshi’s innovation simultaneously gave the Internet a new currency and a vibrant ecosystem centered around its powerful underlying technology known as the Blockchain.  This technology allows users to exchange virtual goods without middlemen in a decentralized, yet secure and organized way.

In the beginning very few people recognized the value of such a system, but its popularity has been growing ever since. Many people speculate on the value and future growth of the system — for example, on whether it will hold its own as an alternative against traditional banking systems or is due to crash for whatever reason. The main focus of my presentation is on how this system works and my proof that it actually does work.

Tobias’ main focus is the development of cryptographic functions in several programming languages in order to allow seamless interactions with the Blockchain network.  He provides tools and software designed to improve access to Blockchain Services for users, developers and other third parties.  In addition to his current work on Waves, he is also a key contributor to Nxt Blockchain projects such as MyNxt, NxtPeers as well as several other projects with the Nxt Foundation. 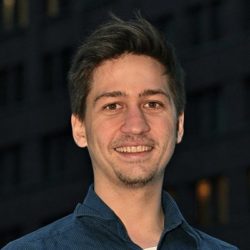