Trent McConaghy is an accomplished artificial intelligence researcher and entrepreneur who has turned his expertise to the paradox of digital ownership and the Internet. He is the CTO of Ascribe.io, a company that uses blockchain technology and Internet-scale machine learning to secure and license digital creations. He will deliver a keynote for Bitcoin Wednesday on 2 September 2015. His talk will explore how ascribing work to the blockchain enables DRM-free licensing, turning intellectual property into a tool wielded by individual creators.

Before his work on Ascribe, Mr. McConaghy co-founded Solido Design Automation.  Solido uses AI to help drive Moore’s Law to overcome the threat caused by extreme manufacturing variation.  Solido software is now widely used in the semiconductor industry in the design of next-generation computer chips. Prior to Solido, Trent co-founded ADA, a VC-backed Silicon Valley firm that explored the relation between human creativity and AI-based machine creativity for computer chip design.  ADA was acquired in 2004.

He started his career as a researcher for the Canadian Department of National Defense.  He earned bachelor’s degrees in electrical engineering and in computer scence from the University of Saskatchewan, and a PhD from KU Leuven.. He has written two books and 50 papers and patents. He has also delivered keynotes and talks at MIT, Columbia, Berkeley, NASA’s JPL, Nvidia, Data Science Day, and PyData, among many others. He was raised on a farm in Canada, writing video games for fun on cold winter nights. Dr. McConaghy also includes painting, BCI hacking, hypnosis, and surfing among his past projects. 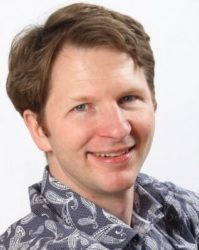