At Bitcoin Wednesday’s 2-year anniversary conference on 1 July 2015, we will be proud to introduce one of The Netherlands’ most prominent digital trend watchers, Vincent Everts.

Mr. Everts has frequently been described as a visionary, a connector and an ambassador for new technology.  He is also a pundit on innovation and sustainable energy on national radio and television.  He was once selected by Management Team as one of the 10 best speakers in the entire country, and is recognized for his tireless dedication to following the latest technologies.  Often sought after by executives to help them accelerate and inspire innovation within their large organizations, he counts trusted names such as Rabobank, KPN, the NOS, and the Ministry of Economic Affairs among his clients.

Adding depth and nuance to Mr. Everts’ perspective on innovation is his experience as an entrepreneur and investor himself.  Earlier in his career Mr. Everts was co-founder and director of a data and document management software company in Atlanta with 70 employees.  He also served as director and Internet evangelist for Media Plaza, an organization that helped introduce Dutch corporations to the Internet.  He was a partner in an investment capital fund headed by renowned venture capitalist Roel Pieper, and he is currently also a founder / managing director for three tech startups, Innovader, Yubby and Incrowd.

Next to all of that activity, he also follows Bitcoin.  He traded them himself briefly during its meteoric price surge in 2013, and used his cryptocurrency earnings to purchase a Tesla model S. Together with some of the Dutch banks he is an organizer of the “National Bitcoin Congress,” the second one held on 24 July 2015 with ING Bank at ING’s main office in Amsterdam. Interestingly, at this year’s event Mr. Everts and the banks have made a concerted effort to divert the conversation away from Bitcoin’s use as money, as a financial instrument or as a payment system, but more broadly toward the technology behind it, the Blockchain.

About his event, he said:

There are 16 speakers invited from The Netherlands and abroad with fintech startups, regulators and traditional financial companies such as ING and ABN. The focus this year is the Blockchain but there is also a “State of Bitcoin” presentation given by Coindesk.  Everything can be followed online, but all members of Bitcoin Wednesday can register to be there in person for €299 instead of €395 with the following discount code: MediaPartner2015)

For Bitcoin Wednesday Mr. Everts will present a summary of the most important conclusions of the congress.  He will also use video fragments from that event to discuss the use of the Blockchain in organizations.

Pictured below is the beautiful Tesla that Mr. Everts bought with his bitcoins. 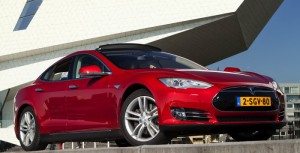