Since its launch in March 2018, the Lightning Network has emerged as one of the most promising solutions to the problem of scaling Bitcoin transactions, leading to a future in which distributed payments are a part of day-to-day life. Our observations of the network indicate that there are a number of technical, social, and user-experience bottlenecks to mainstream adoption of the Lightning Network as consumer payment rails. In this talk for Bitcoin Wednesday’s 5-Year Anniversary Edition, Yuriy Blokhin and his colleague, Viacheslav Zhygulin, from Bitfury will present the data, analysis, and a set of proposed solutions to these problems.

Yuriy is Head of Partnerships at Bitfury.  In this role he helps guide the product roadmap and strategic partnerships focused on bringing the emerging Lightning Network into the mainstream from its current early adopter phase by enabling the use of Bitcoin as consumer-grade payment rails. In 2009 Yuriy was the very first employee at Kik, which became one of the most-used mobile messenger apps in North America, with a valuation of $1 billion, and launched a cryptocurrency called Kin to be used by millions of its teenaged users.  Before that, Yuriy worked at Canada’s TD Bank and Scotiabank as a software engineer.

He studied Mathematical Physics at the University of Waterloo until dropping out to work at a startup. He’s currently finishing his degree through Harvard Extension School. 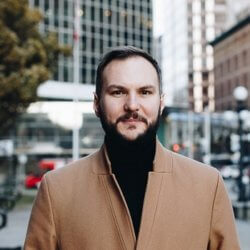