During Bitcoin Wednesday on 2 August, 2017, Zach Harvey, CEO of Bitcoin ATM pioneer Lamassu will give a presentation on user experience and digital currency.  He will review different aspects of user experience in day-to-day Bitcoin use scenarios, starting with Bitcoin ATMs.

Zach and his brother Josh began working with Bitcoin in 2011.  At the time the two of them had decided to start accepting Bitcoin payments at their Tel-Aviv-based online guitar shop.  In 2013, obsessed with the problem of making Bitcoin more accessible, the Harvey brothers created the prototype for one of the world’s first Bitcoin ATMs which they initially designed to bring to Bitcoin Meetups in Manchester, New Hampshire.

The machines were almost an immediate success.  Zach and Josh decided to focus on building them and established a production facility in Northern Portugal.  With this much operational experience, they became specialists in making cryptocurrency accessible to the billions of people around the world who use cash.  Paper, fiat money is accepted universally, even by the unbanked. This background makes Lamassu an interesting case study for user experience. 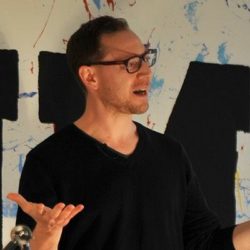