During Bitcoin Wednesday on 5 October, 2016 Dr. Mihail Mihaylov will present his work on NRGcoin.  Dr. Mihaylov is a post-doctoral researcher at the Artificial Intelligence Lab at the Vrije Universiteit Brussel.  His research is focussed on renewable energy, smart grids and blockchain technology.

NRGcoin gives consumers an incentive mechanism to use cheap, renewable energy when it is available. The system rewards prosumers for injecting energy when it is needed. On a global level, these incentives will help flatten the demand curve and thereby reduce the need to fire up emergency coal or gas peak power generators which are both costly and polluting. NRGcoin offers numerous benefits to each stakeholder in the smart grid:

The NRGcoin concept has already been demonstrated on a small-scale smart grid hardware demonstration platform, which won two awards at international symposia.

A number of media outlets have published popular science articles on the NRGcoin innovation:

Dr. Mihaylov received his B.Sc. in computer engineering from University of Duisberg-Essen, Germany in 2007.  In 2008 he obtained his M.Sc. degree in artificial intelligence with distinction from Maastricht University, The Netherlands and was subsequently awarded the Leo Coolen Award for his thesis “Computational Mechanism Design for Wireless Sensor Networks”. In 2012 he obtained his Ph.D. in artificial intelligence from Vrije Universiteit Brussel, Belgium with his thesis “Decentralized Coordination in Multi-agent Systems”.

Prior to becoming a researcher at the Vrije Universiteit Brussel, he worked as a post-doctoral researcher in the University of Leuven in Ghent, Belgium for 1 year, and as a senior research scientist in Sensing & Control Systems in Barcelona, Spain for 2 years.  While in Spain he established the Barcelona Bitcoin Community, which he also organized for 2 years, and is currently co-producer of P2P.Gent, a local Bitcoin meetup group in Gent, Belgium. 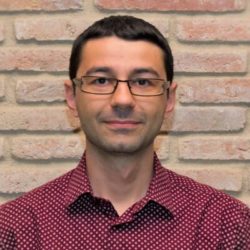