George Papageorgiou visits Bitcoin Wednesday in Amsterdam on 3 February 2016 from the southeastern corner of the European Union, the small island country of Cyprus.  Notable today as the EU member state closest to the humanitarian crisis in Syria, this Mediterranean nation made Bitcoin history at the beginning of 2013 when a financial crisis and a run on the banks sparked a rise in the price of a Bitcoin from $47 to $88 in less than two weeks.  Several months later, the University of Nicosia, a school in Cyprus with 8,500 students, announced that it would be the world’s first University to accept Bitcoin payments and begin offering the world’s first accredited Masters program in Digital Currency.

Mr. Papageorgiou is in fact a lecturer in the University’s Digital Currency faculty.  His talk will be about the incentive structure that currently exists in Bitcoin between miners, users, holders, businesses, developers as well as the externalities of adoption in an attempt to clarify the pressures we’re currently seeing from both sides of the block size debate.  George will be accompanied by faculty member Andreas Vlachos.  Together the two will describe how they’ve structured a program that provides insight into both the conventional approaches of capital markets and fintech as well as the innovation inherent in Bitcoin and digital currencies, and what this new technology can do to reshape the traditional structures.

Aside from its reputation as educational innovator, the University of Nicosia is taking a leading role in the country’s policy as well:  they are proposing the creation of a comprehensive framework for developing Cyprus into a hub for Bitcoin trading, processing and banking.
Mr. Papageorgiou is a former officer of the Hellenic Air Force, with 18 years of experience in military jet aircraft engineering. He also worked another 8 years in Intellectual Property and Technology management consulting, drafting a large number of patents for global companies, several of which he’s the inventor of. He acquired an MBA from Greenwich University, and he’s devoted completely to decentralized digital currencies since 2013, having been involved in Bitcoin since the summer of 2011, mining, trading and investing in the ecosystem.  His first foray into Bitcoin businesses was the appointment as COO at Neo, and he experienced first hand, what the lack of corporate governance and nontransparent management can do to a Bitcoin business.

Since 2014 Mr. Papageorgiou manages the MOOC and co-lectures in two of the MSc courses on Financial Systems and the Developing World, as well as provide Digital Currency expertise throughout the MSc program in Digital Currency at the University of Nicosia. He’s presented Bitcoin in conferences in the US, Greece, Cyprus and appeared on TV in Cyprus and Greece as a commenter on Bitcoin.  Beyond Bitcoin, he has a keen interest in drone technology and open government initiatives. 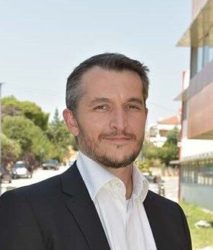