Louis de Bruin is IBM’s Blockchain Leader Benelux, where he has worked on engagements for KPN, Intel and Mercedes, among others.  He is currently working on a Blockchain proof of technology for the RDW, the motor vehicle and licensing authority for The Netherlands.

During Bitcoin Wednesday on 3 August, 2016, Mr. de Bruin and his colleague Jos Röling will give a talk with the title “The Blockchain in Practice” in which they address how IBM sees the impact of the Blockchain on various industries. They will take us through a number of use cases, including some actual implementations in which IBM is currently engaged with customers.  The presentation will also cover IBM’s preferred Blockchain technology, Hyperledger, as well as the reason why IBM has been actively engaged in the Hyperledger initiative.

Louis is an inline skater, vintage car tinkerer and boating enthusiast.  His first experience with the Blockchain came about a few years ago when a friend who owed him money for a meal paid him for it with a load of at the time practically worthless bitcoins.  After a couple of years he reminded him to check his Multibit wallet and, as Louis says, “the rest is history.”  He believes that the permissionless blockchain is an ideal that will keep facing a lot of challenges.  “I have my doubts if it will ever become widely accepted as a platform for business Blockchain applications,” he said, “but I also think that the future will probably be filled with both permissionless and Hyperledger-based permissioned blockchains.”  When we asked him for additional info, he told us, “No one has ever spotted me in the same room with Satoshi Nakamoto.” 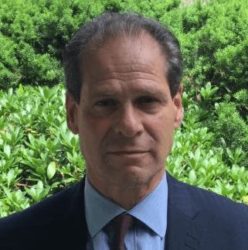