Paul Puey, the CEO of Airbitz

Airbitz Edge Login Brings Single Sign On To The Blockchain

During Bitcoin Wednesday on 7 December, 2016, Paul Puey, the CEO of Airbitz will introduce Edge Login: Single Sign On for the Blockchain.   Edge is a breakthrough security feature for the Airbitz Bitcoin wallet.  This app has long been a Go-To wallet for anyone — but especially for beginners — who want a secure and easy-to-use way to manage their bitcoins.  With Edge, they now also offer single sign for users who might have many encryption passwords, key mnemonics and backup files.

As any regular user of blockchain-based applications can attest, safely managing backups and sign on credentials is an important challenge.  Loss or theft of this information means that the associated coins cannot be recovered.  Airbitz aims to give users the safest and easiest possible way to manage their keys through an experience that is similar to the popular single-sign-on solutions everyone knows from Facebook and Google.

“Our core business is making your private key management as familiar and simple as possible,” Paul said.  “With our Edge Security feature we have no competitors: The idea is to offer a consistent and familiar experience that is as easy as logging into a website without compromising security and privacy.”

Airbitz has six employees and is based in San Diego, California.  The company got its start when it was accepted to the Plug N Play Tech Center’s accelerator program in 2015 which at the time included a $25,000 investment.  Their business model is focussed on partner integrations in the app such as BitRefill for mobile topups and Glidera for buying and selling bitcoins.  They license their SDK to other blockchain apps and offer a paid premium service to users of their Single Sign On Edge Security platform.

Paul is a graduate of UC Berkeley’s computer science and electrical engineering programs.  After his graduation he worked as a lead software engineer for chip manufacturers Nvidia Corporation and Chromatic Research.  Outside of Airbitz Paul spends time with his family, his wife, their little Maltese and an 11-month old son.  He also loves rock climbing, either at his local gym in San Diego or outside on some nearby outdoor rocks.  In a previous life he was a manager and instructor at a climbing gym.

Q & A with Paul Puey of Airbitz

What got you into this business?

The disruptive potential for bitcoin and how it can fix so many of the problems in our world by creating financial equality.

Who are your typical users?

Due to privacy concerns, we intentionally do not know who our users are.  However we have been approached by many leaders in the industry who tell us that they recommend Airbitz to new users. We focus on building a product that appeals to the key advocates and feel we’ve succeeded in doing that.
What do you think are the biggest unsolved technical challenges for wallet developers?
User experience.  We feel the usability around security and key management is the biggest technical challenge and hence why we solely focus on that.  While most people think UX is a question of the design of screens and buttons, in the case of security it’s far more complex and is affected by the technology underneath the graphical user interface as well.  After that the biggest challenge is not technical but rather a question of how to find adoption amongst the masses and a compelling use case.  I think bitcoin itself has a compelling use case simply as a decentralized currency.  Various smart contract apps like Augur add a suite of compelling use cases above and beyond that.
What can you tell us about your investment round?
Unfortunately we can’t disclose much information for regulatory reasons.  We’ve been very happy with the progress, and people can head to airbitz.co/#funding to learn more.

What historical figure do you most admire?

I have a love/hate relationship with Steve Jobs. I admire the products that came out of his tenure at Apple and their ability to wrap complex technology with a friendly experience. However, I think little credit has been given to the surrounding cast around him that helped drive his success, and his abrasive personality is very counter to my core ideals. I hope to achieve the type of product success he achieved while retaining the respect of my staff and partners as a sincere and generous person.

What do you see Airbitz doing 5 or 10 years from now?

We envision ourselves embedded in a vast majority of deployed blockchain apps with our mobile wallet being the master account people use to sign on and secure their private keys. We also aim for adoption of Airbitz into non-blockchain applications such as financial management, personal info, password management, health care records, and content creation apps.  These developments will drive the much needed paradigm shift away from enterprise security and towards Edge Security for sensitive personal data. We see a fundamental shift towards public/private key authentication and identity using digital signatures and we aim to be the key management solution for that new world.

What are you never without?

This is a cliche in the startup life, but I really am never without my smartphone. It helps me with everything from work, cooking, shopping, home repair, travel, climbing, and most important, sending and receiving photos and video of my family while I’m away. I’d like to give a more unique and creative answer to this but I bow down to the power of the smart phone. 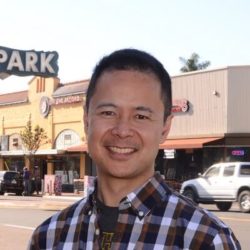