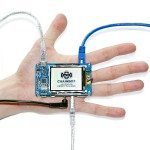 Angel Malecore is the founder of Chainbot, which he calls a “hardware decentralizer.”  It is a small, powerful, low-cost device that also functions as a plug-and-play node for various blockchain-based technologies, including Bitcoin, Namecoin and Ethereum.  He writes:

Decentralized, peer-to-peer, blockchain-based systems are gradually setting us free from traditional hierarchies and unnecessary middlemen.  I consider these systems new forms of life or “Soul Codes” because they give rise to an autonomous, complex universe of interactions and possibilities.

It is of fundamental importance that we take care of these new independent “life forms” in their proper native environments as well as maintain their physical, infrastructural layers in order to promote their positive growth, evolution and interaction both with each other and with other systems and life forms.

Angel literally grew up with computers and never stopped following his passion, curiosity and commitment towards machines, software environments and everything that can be explored, modified or broken.  Angel is also a music producer and studied both philosophy and computer engineering.  A few years ago he decided to dedicate himself to the new decentralization and blockchain technologies, starting with Bitcoin with which he continues to work and, more recently, Ethereum.

Angel is experienced in working with the newly available RISC architectures (both ARM and MIPS), and he collaborated on several hardware-related projects alongside his crypto-related ones.  ChainBot gains from these experiences, and is built from Angel’s vision of the future, a world populated by the living, autonomous entities he likes to call “Soul Codes.”