Developer Ruben de Vries will announce Bitmain’s new sponsorship of Bitcoin Wednesday at the next event on 1 March 2017.

Ruben began his career as a web developer in 2008, the same year that Satoshi Nakamoto released his famous white paper about Bitcoin.  At that time he worked in Rotterdam for an open source web development agency. He then moved to Amsterdam as a developer for the Dutch social network Hyves, which was eventually acquired by TMG, The Telegraaf Media Groep.

Later he went on to become a founder of Vircu, a platform for Bitcoin information.  When that startup was taken over by Blocktrail in 2014, he assumed the role of CTO of the new company, until it too was bought for an undisclosed sum in the summer of 2016 by the Chinese Bitcoin mining giant, Bitmain technologies.  In 2014 Blocktrail had received €500,000 funding from VKontakte co-founder Lev Leviev through his BlockCorp investment firm.

Ruben continues with Bitmain in their Amsterdam office as the technical lead of their original Bitcoin wallet product which operates under the BTC.com domain.  The BTC.com web wallet uses 2-of-3 multi-signature technology as a security feature.

Ruben has spent the last three years building a Bitcoin Blockchain Explorer, a Developer’s API and a Wallet. He has seen his share of Bitcoin transactions and code, and has spent a lot of time contributing to various open source Bitcoin projects and libraries such as BitcoinJS-lib and Bitcoin-php.  Since early 2016 he has also been a core developer for Counterparty, a well-known asset protocol for the Bitcoin blockchain, where he has been responsible for various new additions to the protocol. He ambitiously attempted to run the Ethereum Virtual Machine on top of Counterparty, although the project was shelved after a negative risk assessment of the Ethereum Virtual Machine.  In addition, every now and then his love for coding intersects with his interest in gaming when a new gaming-related open source project pops up on his github. 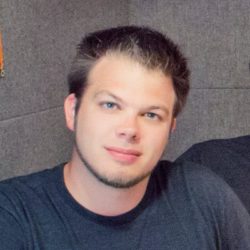