During Bitcoin Wednesday on 3 February, 2016 cryptocurrency advisor Toufic AlRjoula or “Tey” will review a selection of the most significant events in the cryptocurrency sector.  Tey was born in Kuwait, raised in Lebanon, and started his career in Dubai.  He lives in The Hague since 2011.  He has degrees in economics, marketing and business administration.  After a number of years as a corporate trainer in the health care industry, in 2012 he began to work fulltime with cryptocurrencies and holds a certificate from the University of Nicosia’s “Introduction to Digital Currencies.”

“I experienced the financial crash of 2008 in Dubai and moved to The Hague for work four years ago. I can trace my interest in digital currency to a program about money on National Geographic which included Bitcoin and mentioned the word “decentralization” which I had never really understood before.  By this I mean that I began to realize what this technology would mean for generations to come and started to engage in Bitcoin-related activities from mining to promotion, and now spend my time educating companies, individuals, government agencies, press and media about cryptocurrency and what I like to call the “Transnational Global Economy.

It is with great pleasure that I extend my assistance and experience in bringing the smoothest transition into the emerging crypto economy.”

During Bitcoin Wednesday on 2 December, 2015 cryptocurrency advisor Toufic AlRjoula or “Tey” explained what a bitcoin is in a clear and easy way. 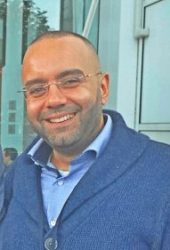