Future of Energy on The Blockchain

Alex D’Elia aka “acme” is the CTO and co-founder of Dajie where he develops its toolkit solution. He is a specialist in mesh networking, smart grids and the Internet of Things.  He is also an expert in the delivery of renewable energy supported by decentralized infrastructures.

At Bitcoin Wednesday on 5 October 2016 Mr. D’Elia will be a panelist on the discussion about “The Future of Energy on the Blockchain“. He will also join his colleague Marco Sachy during the presentation of Dajie.

A pioneer in distributed networking, Mr. D’Elia started worked as a System Administrator for Silver: Server, where he gained experience on Autonomous Systems.  He also participated in Europe’s first “Community Networks” and “Hacklabs” where he gained experience in distributed networking.  In 2004 he developed a full-touch embedded system for the museum MUVS in Vienna.  Starting in 2007 he delivered Smart Cities infrastructures for Italian municipalities.  Aside from his work at Dajie, Mr. D’Elia currently serves as Smart Grid Director at CETRI-TIRES, a scientific non-profit that promotes sustainability and the adoption of Jeremy Rifkin’s model for The Third Industrial Revolution published in 2011, which predicts fundamental economic change when communication technologies converge with renewable energy. 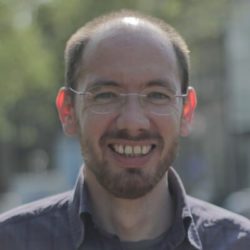