During Bitcoin Wednesday’s Special Edition on Crowd Sales on 12 April, co-founder Boudewijn Rooseboom will give a brief presentation of his company Cyber Capital, a cryptocurrency investment fund based in The Netherlands.  Cyber Capital is developing a differentiated portfolio of more than 50 different digital currencies, based on the team’s belief in the ability of blockchain technology to sustain this emerging asset class.  As of 10 April 2017, the fund posted a return of 457% over the previous 12 months.

After completing a Master’s degree in Economics at the University of Amsterdam in 2003, Boudewijn embarked on an 11-month, 43,000-kilometer journey to Alaska from Tierra del Fuego, the southernmost tip of South America.   He then moved to Brazil where he gained experience with Dutch investments in social housing projects, an occupation in which he had to arrange for structure, taxation and legislation for both Brazil and The Netherlands.  With this knowledge he began looking at Bitcoin and blockchain, a few years ago.

Boudewijn explains that the challenges and possibilities presented by Blockchain technology make it extremely attractive as an investment focus.  Besides these activities he is also taking the post-graduate course for an Executive Master’s degree in Finance and Control at the Vrije Universiteit Amsterdam.  “After all,” he says, “control generates trust, which is the foundation of every investment.” 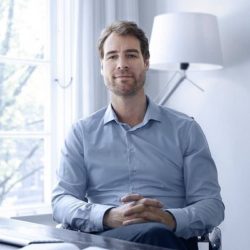