Michael Chin, co-founder of Blockmason, will introduce a new protocol for registering debt and credit obligations on the blockchain at Bitcoin Wednesday on 4 October, 2017.  Since BlockMason already has working alpha versions of their products, Michael will demonstrate Friend in Debt (FiD), their first decentralized app, which has full wallet features as well as the ability to create, track and settle social debts among friends.

It’s worth mentioning that the notion of debt was once considered anathema in the sector.  The blockchain was created as an answer to the credit crisis of 2008, and to this day, Bitcoin, with its fixed supply of 21 million, is considered a haven from the risks of fractional reserve banking.  Will this be a case of George Santayana’s aphorism “Those who cannot remember the past are condemned to repeat it”?

Michael Chin, who spent four years in the credit department at America’s biggest bank, J.P. Morgan Chase during the immediate aftermath of the financial crisis, will definitely have something to say on the subject.  J.P. Morgan is currently the largest bank in the U.S. and number 6 worldwide and has been involved in some of the greatest hits of modern financial scandals, including Enron, Worldcom, Bernie Madoff, Bear Stearns and Washington Mutual.  The bank agreed to pay the U.S. government $13 billion in penalties for the last two scandals alone.  This is the same J.P. Morgan, coincidentally, whose CEO Jamie Dimon called Bitcoin “a fraud… worse than tulip bulbs.”  After his stint at J.P. Morgan, Michael worked for European mezzanine debt pioneer Intermediate Capital Group.

Now at Blockmason, Michael is helping to launch their Ethereum-based Credit Protocol, which they call “the next logical step in the decentralized economy”.  By cutting out the middleman and permanently registering debts and obligations on the Ethereum blockchain, they announce, somewhat breathlessly, “it is entirely possible to imagine a future in which debts and credits recorded in a blockchain could exceed the total market capitalization of all cryptocurrencies combined.”

Remarkably, Blockmason plans to open its token sale to the American general public, despite the Security and Exchange Commisions’ statements on token sales.  In his presentation for Bitcoin Wednesday Michael will address why he believes that Blockmason’s Credit Protocal’s Tokens (CPTs) are utility tokens that do not qualify as securities under any part of the Howey test.  Is this reading a carry-over from the anything goes culture he learned at J.P. Morgan?  Come to Bitcoin Wednesday with your questions, and you decide. 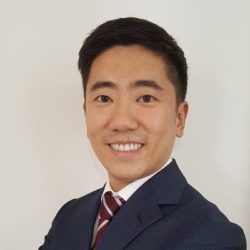