Rune Theill is an entrepreneur and investor as well as the CEO and co-founder at Amsterdam’s Rockstart, one of Europe’s first multi-vertical accelerators that provides startups with access to capital, market, community and expertise. He currently serves as an advisor to many startups, including 3D Hubs, Crowdyhouse, CoffeeStrap, Bomberbot, and Codeplace, and is also a jury member at Venture Cup.

Prior to building Rockstart, he launched a couple of startups, Nu det jul, Ivoteshopping and Øbrocentret, including one that failed pre-market and one that slowly grew over four years before being sold to a competitor. Before moving from Copenhagen to Amsterdam, Rune also took an active role in the Danish startup ecosystem working part-time for Venture Cup and co-organizing the Startup Weekend hackathons. He is an experienced ecosystem builder in specific vertical domains, such as Digital Health, Smart Energy, and Artificial Intelligence. His expertise lies in business strategy, personal and team development, marketing strategies, and fundraising. 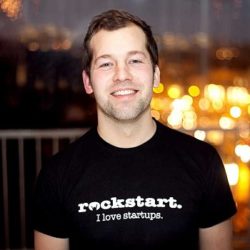