During Bitcoin Wednesday on 6 September, 2017 LA Token’s CEO, Valentin Preobrazhenskiy will introduce the concept of asset tokenization for illiquid properties such as real estate, bank loans and works of art. LAToken is a blockchain-based platform for managing the value of these illiquid assets. It launches what it calls a “token sale event” on 22 August, 2017.

Bitcoin’s limited supply, its reputation as the world’s first, best-recognized, most-proven and most widely used blockchain has certainly contributed to its current valuation: as of 12 August, 2017 a single Bitcoin is worth almost 3 times more than a single ounce of gold. Unlike gold, however, bitcoins can be stored, transported and exchanged reasonably quickly and for relatively little cost. LAToken aims to apply the same approach to illiquid assets like buildings and bridges, allowing us to effortlessly buy and sell small fractions of property anywhere in the world.

Valentin Preobrazhenskiy will explain the concept and use some basic examples to show how LAToken executes it with Ethereum smart contracts. Valentin previously founded the home equity marketplace Zalogo which facilitated more than 12000 home equity offers and 1000 transactions in 2016. Before that he was director of one of the world’s largest startup accelerator programs, the Founder Institute, where he mentored P2P marketplaces for Real Estate and Artworks. He is also the leader of the Founders and Developers blockchain community with 1500 participants and more than 50 meetups since 2015.

Earlier in his career he managed the long-short portfolio at Avega Capital which handles hedge funds for equities and derivatives. He was the Director of Research at Marcuard Spectrum for a portfolio worth $180m for Absolute Return and Value funds (long/short equities, Eastern Europe). He also worked for IHS CERA, Sberbank and VTB. He graduated from the New Economic School, studied capital markets at Harvard and Stanford and served as a vice-president of the Harvard Club in Russia. He also launched the Global Education scholarship program for 700+ students. 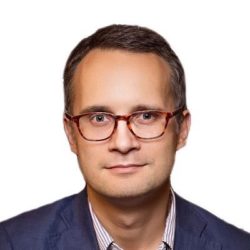