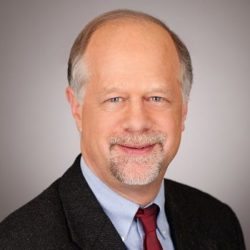 Monetary economist and George Mason University professor of Economics Lawrence H. White shared his insights on Bitcoin and cryptocurrencies in general during an exclusive interview before his appearance at the Bitcoin Wednesday conference on 3 January 2018. He spoke to Rik Esselink, the Managing Director of connected-home startup Ring.com, who served as session chair of the conference.

Professor White discussed the future of Bitcoin and other cryptocurrencies, how he got interested in blockchain technology, and some of the opportunities he learned about in the sector. He also predicted which alternative cryptocurrencies may become more influential in 2018. He said:

What captured my attention about cryptocurrencies and Bitcoin when it came along was, here is a privately issued non-commodity-based currency. Although it doesn’t work based on promises about keeping its value stable, it works based on rules programmed into its source code that promise to keep the quantity limited. However, this limitation in the quantity of Bitcoin released leads to volatility in the network. So, it would be interesting to see whether this is compatible with more widespread adoption as a medium of exchange or a currency.

I think if you look at the market capitalization of Bitcoin, even though that is not a perfect measure of how much of it is actually circulating, you can say that a lot of people believe that this is technology with a lot of useful applications. By now, as per its market capitalization, it is the number six currency in the world. So, that is a change in the kind, and not just the degree.

Here are some of the most notable moments from the interview:

0:50 – How did you get interested in Blockchain technology?
4:05 – How has your research progressed since then?
5:06 – How do you think Bitcoin works?
9:15 – Are we witnessing a shift from a fiat currency system to cryptocurrencies?
10:25 – What could be the future role of cryptocurrencies in the economy?
12:25 – Do you think there is a path towards solving Bitcoin’s scalability and energy-consumption issue?
14:15 – What do you think are some of the alternatives to Bitcoin in 2018?
18:50 – What do you think about governance in Blockchain?
21:30 – How do you think the business case of Bitcoin is going to develop?