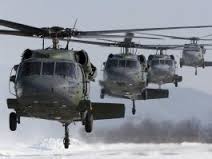 A front-page story by New York Times journalists Mark Mazzetti and Helene Cooper reveals billion-dollar windfalls to defense contractors such as Boeing, Lockheed Martin and General Atomics for sales of American missiles, bombs and other weapons to clients in the Middle East.

Conflicts in that region have created a military spending boom. The defense industry represents an estimated $1.5 trillion per year in worldwide trade (about 2.7% of global GDP) with a growing chunk of the business the result of escalating tensions throughout the Arab world.

With such powerful financial interests in arms sales, the U.S. government is clearly under pressure by the defense (and Wall Street) lobby to approve these deals even while trying to play a leading role in international money laundering and terrorist financing countermeasures. According to the New York Times, this situation raises “the prospect of a dangerous new arms race in a region where the map of alliances has been sharply redrawn.”

How is this relevant to the digital currency revolution? Many aspects of these same money laundering and terrorist financing countermeasures may find their way into regional and national regulatory frameworks for cryptocurrency. I think it’s fair to question U.S. positions on these subjects until they find a way to resolve these dangerous inconsistencies.