On 4 February 2015 stichting Bitcoin Nederland, the Dutch Bitcoin Foundation, conducted a general poll about the needs and concerns of the Dutch digital currency community.

Here are the results:

The Foundation will soon make a call for comments and suggestions for future polls and is actively looking for volunteers to help realize the proposals with the greatest support.

To volunteer to help Bitcoin Wednesday, just send a mail to hello (at) BitcoinWednesday (dot) com.

The top three proposals were “Support start-ups with legal help, funding, etc.” with 31 votes, “Support non-financial applications” with 24 votes, and “Enabling Bank accounts for Bitcoin companies and users” with 21 votes.

Based on these poll results (and the debates and round table discussions held by Bitcoin Wednesday), the Foundation was heavily criticized for its past involvement in projects that appear only to be an agenda of a small but vocal minority. One of these projects in particular, “Bitcoinisgeld,” was launched by Bitonic despite very strong objection by other members of the Foundation Board.

Both current and previous board voted unanimously against “Bitcoinisgeld” by adopting the first and only official standpoint on this subject:

“Bitcoin is much more than money. The financial applications of decentralized Blockchain technology are only the tip of the iceberg.”

The “Bitcoinisgeld” campaign is misleading to the public. The above statement applies equally to Bitcoin and bitcoins, especially since the digital tokens themselves are one of the most important ways we use the protocol. The Foundation donated no money to “Bitcoinisgeld”, and the misuse of its name in connection with that project is a clear contradiction to the Foundation’s mission.

With the results of this poll we also have another clear mandate from the community that the Foundation was correct to withdraw its association with “Bitcoinisgeld”. The category that received the second most number of votes in the poll was to support the diverse non-financial applications of Bitcoin technology.

The debates and polls that have been conducted will matter. They allow the community to join the conversation and to influence the Foundation’s future course. The next step is for people to contribute by volunteering and donating to projects they support in order to reduce the effect of a narrow, “inner circle” agenda. While it’s too soon to predict what the effect of such agendas would be, it will take active and effective participation from as many of us as possible to help raise awareness, increase transparency and make the improvements the community clearly wants to see. 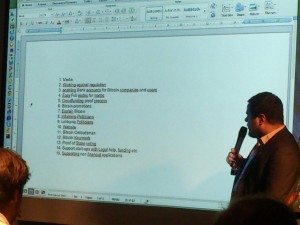